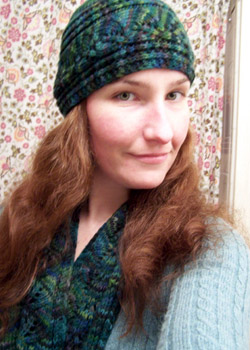 Me modeling the hat with the matching scarf. 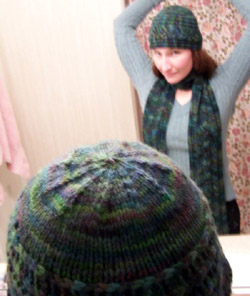 A close-up of the crown.

A close-up of the leaf detail. 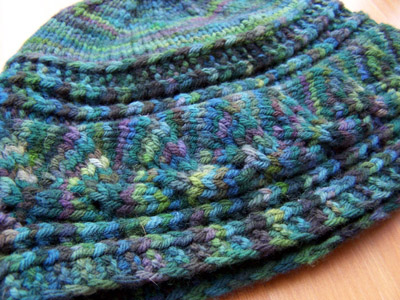 Here are some hats other knitters have made from this pattern. Click to see the photo full-sized.

I worked this hat in Mountain Colors 4/8 Wool (a worsted weight yarn), colorway Juniper, on size 7 straight and double-pointed needles. I used less than one skein (which is 250 yds per 100 gm skein).

To make the band:

Repeat these 8 rows 16 times. [This should make the band long enough to wrap comfortably around an average adult head (about 21-22 inches). You can of course make it longer or smaller to fit your head, then you would need to adjust the number of stitches you pick up to form the crown.] Then bind off. At this point, it is a good idea to block the band before starting on the crown.

Join the edges of the band using your preferred method. (You can also choose to start the band with a provisional cast on then graft the edges - this will result in the most finished look.)

To make the crown:

Carefully turn the band right-side out. Using a stitch marker, mark your beginning point and knit around for 10 rows.

Place a stitch marker to mark the beginning of the decreases.

k2tog - repeat 5 times - you will have 6 stitches left on the needles.

Place 3 stitches each on 2 needles. Cut the yarn leaving about 12 inches. Thread this through a yarn needle and thread through the remaining stitches and pull tight to close the hole. On the inside of the hat, weave in ends well.

Weave in any other remaining ends.
Copyright 2007, Brooke Nelson
Contact me!